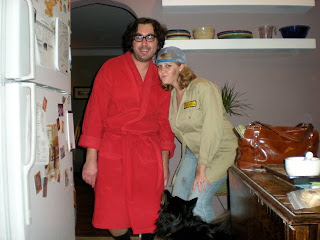 I’ve had some people prodding me for an update, so here it is.  Just a quick recap since October.

I’m a trucker and Ryan just got out of bed.  Bella is the doggy that had to stay home. 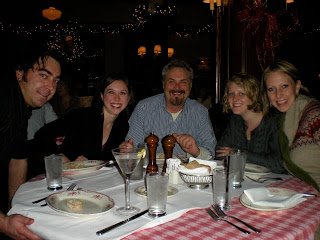 Thanksgiving
R to L is Ryan, Shannon, Daddy, me, Leah.  We stayed with my little sister Shannon in Chicago.  She and Leah cooked us an amazing Thanksgiving meal Wednesday night when we got there and then on Thursday we went to Maggiano’s for an amazing family style dinner where we gorged ourselves on crazy good bruschetta,  pastas, traditional thanksgiving faire and amazing desserts! 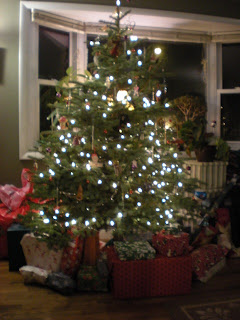 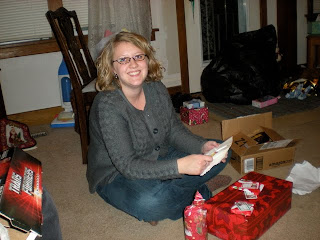 Santa came
He brought us a Wii and Super Mario Wii, and Wii Fit Plus.   I haven’t been doing a whole lot other than playing Mario.  I am addicted and in less than a month have gotten to the Castle at the end of World 5.  I keep telling myself to slow down because if I beat the game this fast, then what am I going to do?!  But I just can’t stop.
Ryan’s birthday is the day after Christmas and I planned a surprise birthday party for him.   It was great and he had NO idea anything was going on. 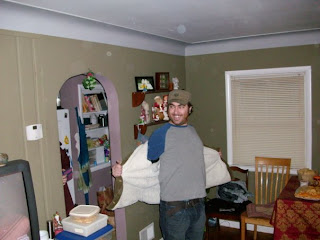 Surprise!!!
For his birthday I gave him a pair of (one finished but unfelted and one almost finished) clog slippers.  Here they are finished and ready for felting. 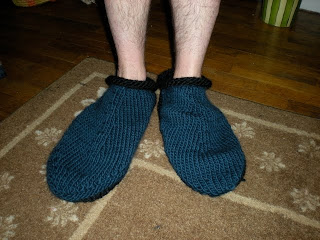 The only other gift I made this holiday season are the cutest pair of baby slippers I have ever seen!  My cousin and his wife are having a baby in February.  Her shower was the first weekend in December, but the slippers weren’t done until the 26th.  So I gave them to her at our family Christmas. 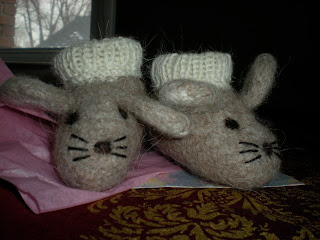 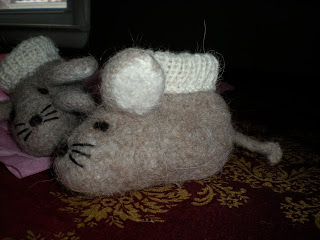 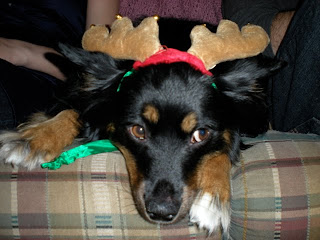 I think Bella got more gifts than any of us.  She was due though, she was a good girl this year and all of her toys were getting worn out, her balls didn’t squeak any more and none of her stuffed animals had any fluff inside of them.
As for 2010, January is shot.  We are in the middle of painting our living room.  As you can see in the “Surprise” picture above our front room is a dark forest green.  I’ve hated it since the day we moved in, possibly since before the house was ours.  The room is not very big, and we have a lot of furniture packed in there since it is a living room slash dining room.  That dark color on the walls makes it so dark even when the sun is shining through our large bay window.  We are going to work on it all week after work, getting it prepped for paint and then hopefully have it done by the end of next weekend.  After that is finished, my sewing room is an absolute mess.  A lot of the stuff that had to be cleared out of the front room for painting ended up in my sewing room.  And it was a pretty nice disaster before that happened too.  Things just keep going into the sewing room and never coming out.  So don’t look for any sewing projects to be coming out of there anytime soon either.
I’ll be knitting though…  if I’m not playing Mario.

I'm a mom, artist, knitter and fiber-obsessed pack rat. I love to find and rescue old things and give them a new life and new purpose.

Add your name to the email list for exclusive coupons and sneak peeks!

You have Successfully Subscribed!

I loathe spam, you won't get any from me!